Hello from a grey and cold Edinburgh! Still no summer in sight, so really hoping Finland will deliver instead in a couple of weeks when we go over…Anyway, I’ve had a very indulgent weekend with Afternoon Tea, fish and chips and sweets – and now I feel rubbish!

Matthew’s has started going to his office for half the day today, which means I’m alone with Lana and my broken wrist. But so far so good, I’ve managed to change her nappy and keep her alive 🙂 I went to see yet another doctor last Friday as I wanted to make sure the bone hasn’t moved after my procedure, and it looks like all those supplements are doing their job as she said it’s healing very well 🙂 So only a week and a half and the cast comes off – can’t wait!

As I can’t carry Lana around too much at the moment I figured I’d be a bad parent and put her in front of the telly to watch the Moomins for a while – and she loved it! We watched a whole episode together – I want to start early so that she can hear more Swedish (the kind we speak in Finland that is).

Matthew’s colleagues gave us a gift card for Mamas and Papas after Lana was born, so we got her her own wee chair so that she can sit up like a big girl – as you can see she looked pretty relaxed in it 🙂 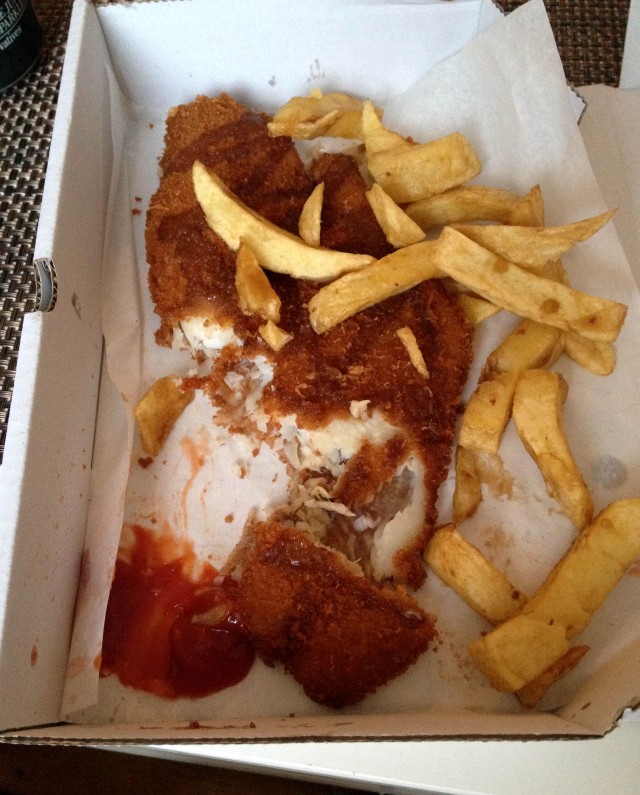 On Friday night we decided to go see Jurassic World – after checking that Matthew’s sister was happy to babysit Lana for a couple of hours first of course. Matthew’s parents have looked after Lana for a few hours on several occasions, and I’ve had no problem being away from her. However, this time, when I saw Lana’s little face in the back of the car I just burst into tears – completely unexpected! Maybe it was the fact that this was the first time I’ve been away from her in the evening or seeing her being driven away in a car – who knows! Matthew laughing his head off next to me didn’t make things better either…

Afterwards we got some fish and chips – it was nice enough but it’ll never be a favourite for me I’m afraid. Guess I’m not British enough!

We’ve ditched the carrycot and started using the pushchair instead – as you can see she it still leaning back quite a bit but now she can see a bit a more of the world. 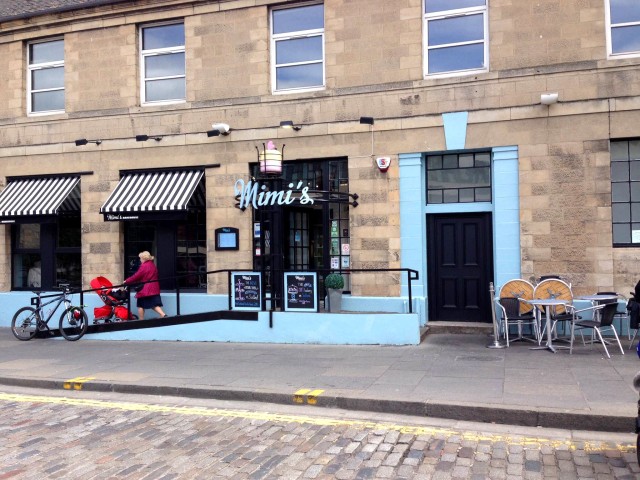 On Saturday we decided to go for a walk down to Leith for some lunch. It was one of those days when we just kept bumping into people – think we stopped 4 times on the way, so it took us quite a while. We walked past Mimi’s Bakehouse and thought we’d give it a go as we’d heard good things about it. 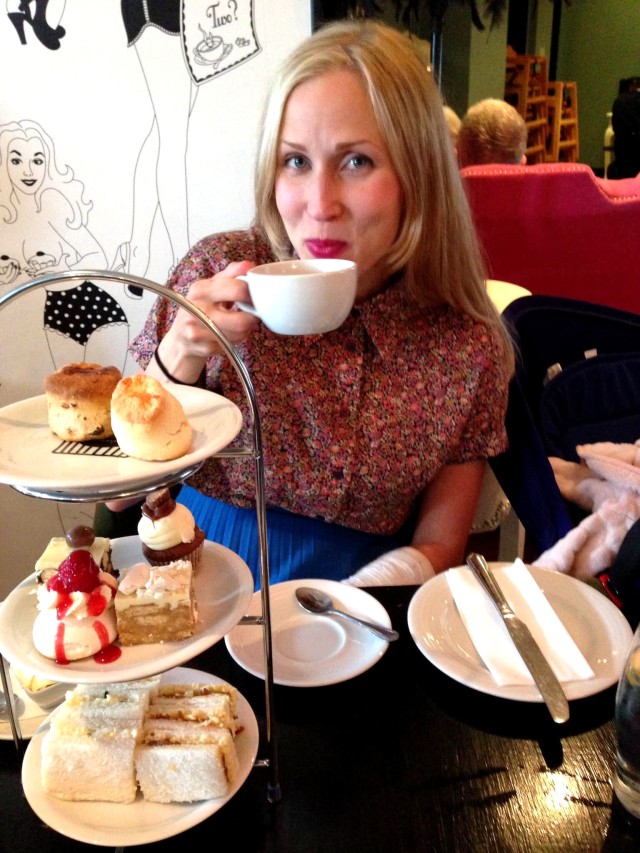 They do Afternoon Tea for £15 per person, so decided to finally give it a go – after 3,5 years in the UK haha. 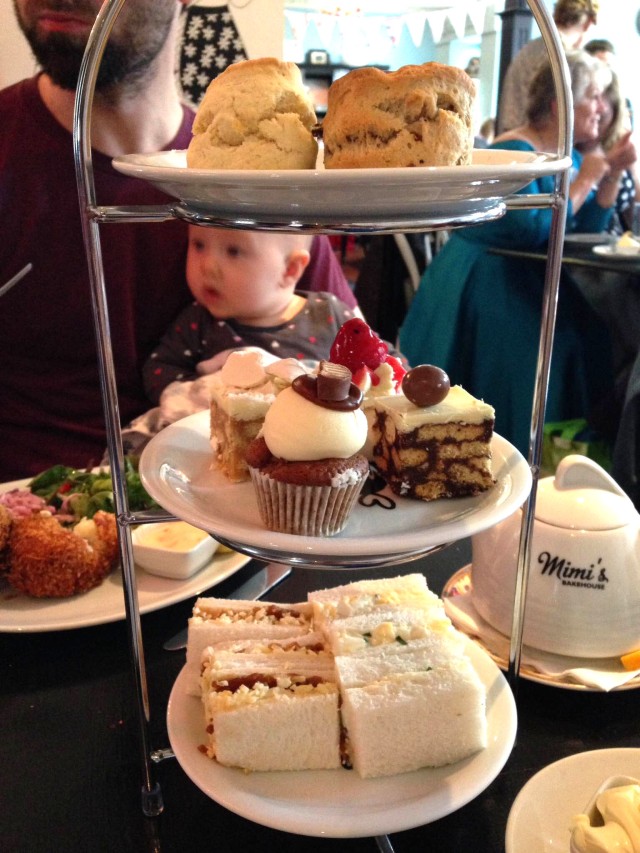 Matthew was busy keeping Lana entertained so that I could indulge 🙂 He was one of the very few guys there – it’s the perfect place for hen dos and meeting up with your girlfriends. 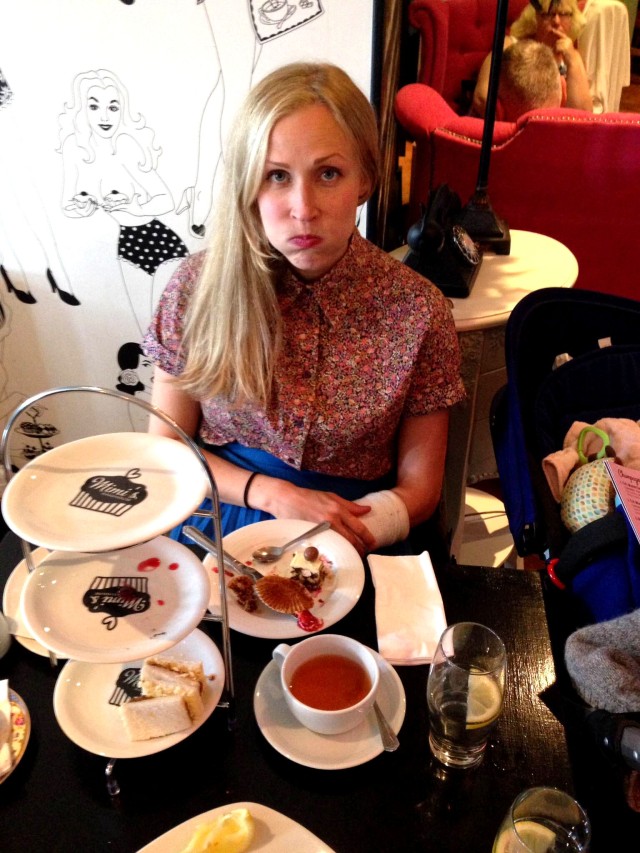 With only a little help from Matthew I nearly finished the whole thing! We still popped into Nordic Affär after to get a little bit of salty liquorice as it was on our way…Just what I needed after loads of sweet cakes!

After buying Matthew’s new iPad a case the sun came out so we just had to sit down for a glass of vino. The whole time I was convinced people were looking at us thinking we were bad parents for drinking wine with a baby…Does anyone else feel the same in a situation like that?

I still tried to enjoy my spritzer – yes that’s a spritzer, not a massive glass of wine haha!

Yesterday we visited the market just around the corner from our flat where we got some tasty dumplings for lunch. We then walked (and bumped into more familiar faces) to Matthew’s parents house for a quick visit – here’s Lana trying out hats with her Pop.

Matthew just booked his flights to Finland, so he’ll be coming with us after all. Think it’s the best solution as my hand will be quite weak when the cast comes off, and I’d probably struggle quite a bit with two flights and a wriggly baby…Matthew will only come for a week though, and then later on in summer again so he won’t be apart from Lanushka for too many weeks…Excited!

Finally we have some furniture on our terrace - wh

My favourite spot in Oodi library. Felt good to be

We’re home from Tallinn and apart from the initi

It was back to work for me today, and the second d

😇 I saw this mural on somebody’s insta and wa