It is crazy how time flies when you watch your children grow. My little girl is now 7 months old. 7 months! I didn’t expect her to be so “big” already – I thought I would have that little helpless baby to care for for a bit longer. Instead I now have this big little girl who’s crawling, standing up, sitting up, eating (or well, trying to…), “talking”, teething and who’s just so brave and independent already!

Lana’s definitely an early developer – everything seems to have happened almost overnight, before we were expecting it. And now there’s no stopping her! Lana is constantly on the move, exploring everything she can get her hands on. She barely calms downs enough to eat, to get her nappy changed or to let me dress her. There are just so many other, more interesting things she needs to tend to 🙂 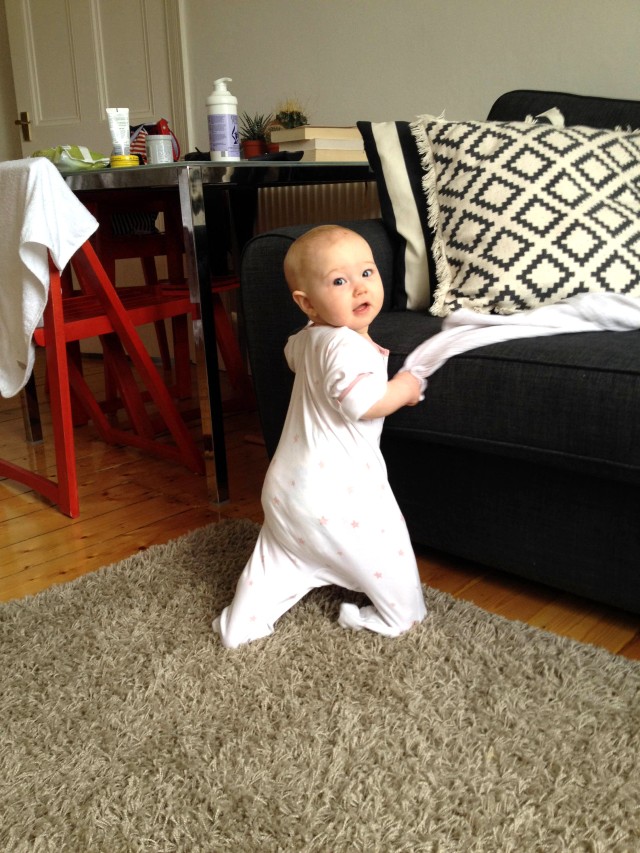 Lana is an extremely happy and smiling baby with such a big personality. She smiles at pretty much anyone and anything. She actually deliberately seeks attention when I’m out with her by staring, talking and smiling at people until they notice her. This means that she also gets a lot of attention wherever we go – never ever have I talked to so many strangers! Will be interesting to see if this continues when she gets a bit older. Hope so!

Lana’s reflux problem seems to be completely gone, and so is the spitting up problem. I think the fact that she’s no longer lying or crawling on her stomach has helped. Her rash is under control, with small flare-ups whenever I eat something with egg in it (or that’s what I think). However, it has never been confirmed, so I’m not sure whether she really has an egg allergy or perhaps just eczema. She has an appointment to see a dermatologist at the end of the month though, so hopefully we’ll know more after that.

She’s still also waking up several times a night – from 6 to 10 times at the moment. As she feeds every time she wakes up in order to fall asleep again she’s not particularly hungry during the day, especially in the mornings. This obviously affects the weaning. So now I’m trying to cut down on the nightly feeds, which usually results in a lot of screaming…So to say I’m sleep deprived is an understatement!

I have a feeling Lana will be an early walker – yesterday I caught her trying to stand without holding on to anything, and she actually managed a couple of seconds :O But then again who knows, she might not be!

Broccoli was definitely not a favourite – but fun to play with! 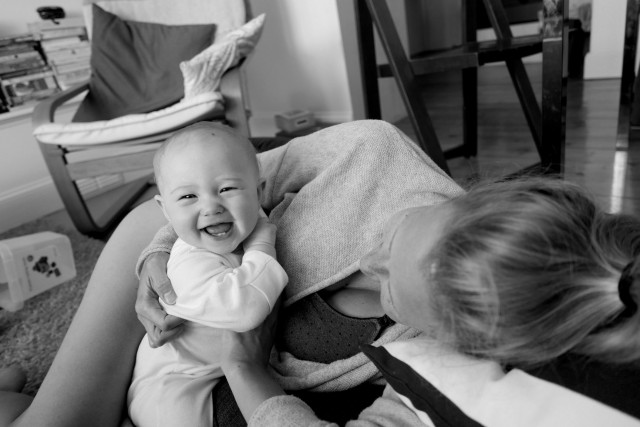 There is nothing better than waking up to Lana standing in her cot smiling at me or slapping me on the head, trying to grab my nose or pulling my hair while she’s babbling away like there’s no tomorrow (if she’s in our bed). Don’t know how anyone can be in such a good mood in the mornings (she definitely doesn’t get it from her dad)!

We are truly blessed to have such a great little character as our daughter, she makes every day so much fun. She’s just perfect (even though she doesn’t let me sleep) and I’m so proud to be able to call myself her mother.

PS. Looks like Lana and I will be flying to Finland again for a couple of weeks on October 1st, yay! I just managed to book the wrong return flight AND get Lana’s name wrong…(This is what sleep deprivation does to you!) Thank god for the free online cancellation service with SAS!!